It's a beautiful summer day in Melbourne, and I'm joining some seasoned cigar smokers in the courtyard of one of the city's hotels. My companions open their travel cases and humidors and produce fat, dark cigars and, with deft precision, decapitate them with bespoke cutters. They are also armed with whiskeys of imposing rarity, which they lazily chat about as I, apologetically, plop a six-pack of pilsner on the table. I complete the contrast by coaxing a Quintero panetelas from my zip-lock bag and, hat in hand, beg the use of my neighbour's cigar cutter. I knock the top off a pilsner, gratefully accept an offered jet lighter, and crudely set the Quintero ablaze. 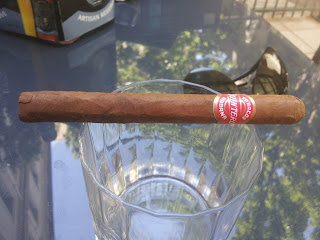 Many years ago I lived in Canberra, where there's nothing to do besides work, drink and, if you're lucky, do casual sex. I used to do said casual sex with Carol, who was a beautiful but loathsome character of 45 - twice my age - who held a stratospheric opinion of herself, but didn't have a single characteristic of which it was worthy. We had two common interests, however, being drinking and sex, and we'd regularly meet to do both with fairly unchecked abandon.

Carol had two teen aged children who were both dirtbag vandal fuckups and we, with my living situation being agonisingly communal, were wholly reliant on them being out of her house to achieve our awful coitus. One night I received her usual garbled text message, and made my way promptly over. The house - a dilapidated semi-detached in the badlands of Canberra - reeked of ashtray and alcohol, and she smiled at me through a hungover fug as I entered the lounge room. My sole form of transport at the time was an old motorcycle, and she asked me to carry her to bed with my jacket and helmet on. I took her awkwardly in my arms and wobbled her to the bedroom where, after a brief pause, I went to throw her on the bed. Unfortunately she'd held onto my thick leather jacket, so I went tumbling after her, and ended up slamming into her face with my helmeted head.

The first thing I notice about the Panetalas is the draw's extreme tightness, akin to sucking ice-cream through a straw. I keep recutting the cap, but the tightness continues, and each draw requires me to suck and squeeze until my cheeks hurt just to coax its smokey load through the thin shaft. When enough effort is applied the Quintero rewards me with very mild tobacco and a hint of straw, and leaves a citrus tang on my tongue. As the final inch draws to an agonising close, the Quintero gives me the subtle sweetness of lactose, and I rue the effort it takes to extract. It would be a fine smoke if it could be smoked properly, and I notice my companions squinting pityingly down their crooked noses at me between easy draws of their smouldering donkey-dicks. 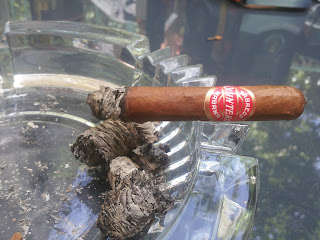 Carol recovered from the battering, and we commenced our usual loathsome hatefucking. In our first few sessions she would ride me while slapping my face and throttling me, which I later found out was her way of saying "slap my face and throttle me, idiot". On this particular night I gave her a playful smack on the ass, at which she flew into a rabid fury, clawing my face with her harpy talons and reproaching me for degrading her. I apologised and, with the skill of a creep who made women angry more often than not, went back to making her retch and moan with my angry strangulation. It was during the throes of one of her loud orgasms that I heard a faint cough coming from the adjoining lounge, and promptly told her about it. She sat bolt-upright and, extracting herself from me and throwing on her dressing gown in one movement, went out to argue with her son.

My struggle resumes past the midpoint where, through ever-strengthening mid tobacco, I still taste the occasional hint of orange zest. There is no tar, and the pilsner, though one of the worst examples I've ever had, complements it well. I have tobacco all over my lap from where I've attacked the the Quintero with my fingernails and car keys in vain attempts to clear whatever's blocking the airway. It is useless, however, and just leaves me with sour tobacco as I strain at the Panetela's soggy nub. I interrupt the table's talk of tobacco and whiskey with a raucous belch, and the beer I bring up mixes with the cigar's dry residue, and floods my mouth with the ashy sweetness of a sodden beer coaster left in an ashtray. 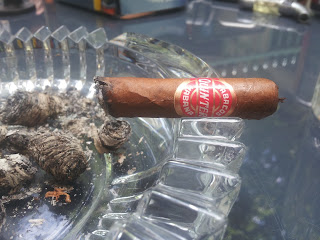 I gathered from their domestic blowup that the son had returned early from whatever vandal fuckups do, and I lay impatiently on the bed and nursed my outrageous and persistent erection. She eventually returned and, shamefacedly, attended to my cock, but kept pausing in her ministrations to discuss her son with a resentful, almost Jocastan, jealousy. I quickly tired of it, and rolled, loins burning, into my jeans, and wandered out into the lounge room. Her son, an over-pierced FUBU-clad burnout, was laying on the couch, and I regarded him with a sneer. Surprisingly, he bounded up, politely introduced himself, and curiously offered his hand on which, after brief hesitation, I gravely left his own mother's musky dregs. He went to open the front door for me and, as I was pulling on my helmet, told me that he liked my motorbike. I paused, as curious about this kid's gentle manner as I was annoyed by its application, and turned on my heels. "Thanks" I smirked, still bitter about the orgasm I'd been denied, "I liked fucking your mum". The slam of the door heralded their scumbag quarrel anew as my bike spluttered to life and bore me, irrevocably, into the night.

In the final inch the cigar strengthens, and I detect tar for the first time. I'm breathless and spent from an afternoon of dutiful sucking, and my cheeks ache with each strained draw. Still, the Quintero remains delicious, and I consume every smokable millimeter. I understand that the Panetela's slender size, short-filler tobacco, and a possible manufacturing anomaly might have caused my draw problems, but my aching mouth leaves me conflicted about giving it a second chance. It's unfortunate, but this is one interesting little cigar that I have to advise against. 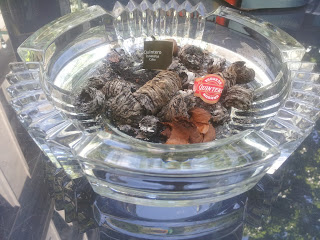 Quintero Panetelas on the Cuban Cigar Website.
Posted by Davidé