It is still a scorching summer in Melbourne, and the stifling heat in my apartment can no longer be beaten back by the creaking ceiling fans. Seeking shelter from the summer outside may seem counter-intuitive but, as my mum used to say "get out of the house now if you know what's good for you". And so I've found myself on a bench by the river, in the shade of a large billboard, and seated outrageously between a futuristic unisex public toilet, and an overflowing rubbish bin. I'm cradling a tiny cigarilla in my grubby paw, and it's about as pathetic an offering as I have. There is not a soul around. I might, and might as well, be dead. Let's take it to the flame. 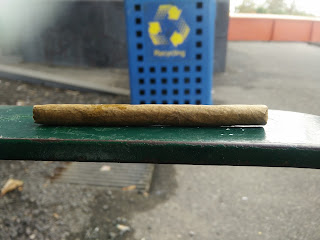 The Winterman starts as well as any other bic-lit bottom-range cigarilla, with dominant mid tobacco, instant tar. I detect chemical, but then I am sitting next to a public toilet. I watch a girl approach along the path. She is about 19, gorgeous, with light brown hair swept to one side of her porcelain face, bouncing gently with every step of her long, bare legs. She is wearing a singlet with what looks like a man's shirt unbottoned over the top, and a pair of tiny cutoff jeans. She studies me as she approaches, perhaps because I'm the only other soul outside in this heat. I notice as she draws closer that her face is twisted into a grimace, and realise that she might rather I not be sitting right next to the toilet she's about to occupy. I puff thoughtfully on my cigar while tracking her approach, and watch as she sends the door sliding open with a press of the button. "Door, closing" chimes a voice. I hear a toilet seat cracking against a steel rim, and a tractable thudding sound as the weight of her buttocks is further applied. The Henri Winterman burns crisply, imparting now peppery mid tobacco and lots of tar as it mingles with a tinge of ammonia and fades toward the midpoint. 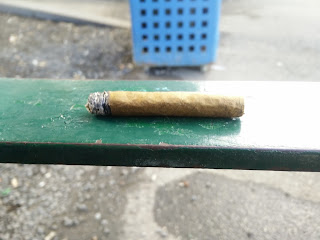 The sounds from the steel public toilet are abominable. Disgusting. Thrrrrrpts and plips and plops, grunting, interspersed with sickening *thunk* sounds as the occasional solid shit smacks against the steel. I recoil in disgust as a sudden ripping sound tears through the cubicle, and I realise that not two arm-lengths away an actual human is forcing her disgusting excreta out of her dirty hole, with graceless abandon. I imagine her, doubled over the bowl, red faced, hair limp in the searing heat, shit flecked buttocks flapping open over its foul deposit, like a ribald monarch addressing its masses. Women are disgusting. The cigar burns untouched in my hand. 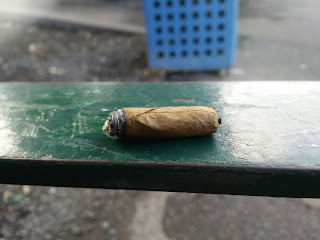 Silence has descended on the cubicle, save for the occasional blotting of paper against flesh. The little cigar is burning coolly in the heat, still tarry, but rewarding my controlled drawing with a hint of pepper. I hear the sound of a clanging belt buckle, followed by the dull roar of the flushing toilet. A staccato trickle indicates that hands are being washed under a temperamental sensor-tap, after which a hand dryer is deployed for what seems like an age. Eventually the door slides open, and the warm reek of bleach and feces wafts toward me. The girl and I lock eyes briefly, then she lowers her gaze and slinks past me the same way she came. As she passes I extend my tongue past my lips, laying it flat like a burger patty between two soggy buns. I slowly blow air out of my lungs, and feel saliva fleck my chin as the underside of my tongue reverberates lazily against my bottom lip, mimicking the sound she made with her disgusting arsehole not minutes before. I maintain the lazy raspberry as I follow her retreat, noticing a quickened step as she makes her escape. 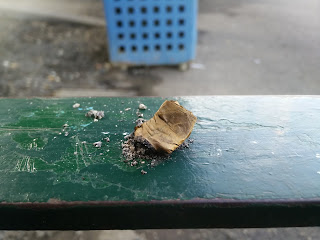