Mr G, my longtime associate and miserly employer, is hosting a party. I'm invited as a friend, for once, and have found myself on the outside of him and a familiar group of loud, balding, 30-something business types, each nursing an elaborate cocktail. They are trading stories, and the conversation ebbs and flows between long build-ups and raucous laughter as they try to outshock one another. My thoughts flick fitfully back and forth between my awful present, and my not-too-distant past; the shouts and jostling from the crowd putting me straight back in the war, and the lazy scotch and I've poured myself snapping me right back to my present with each smarting sip. I'm nursing a Cuaba Divinios, soon to be alight, when a sudden craving for the leaf washes over me. Scorning the balcony and backyard, I rip the cap from my Cuaba and set it ablaze, sending a waft of rich, grassy smoke over the guests. I've reviewed one of these before, and I'm hoping that it's the same punchy little smoke it was 12 months ago. Mr G stops talking and, ignoring my outrageously lit cigar, breaks into a vile grin. "I hear you have some war medals, Davidé", he bawls, silencing other groups of party goers until the whole room is looking at me. "What did you even do in the war?". I study my boots for what seems like an eternity, while rolling the rich tobacco and old leather taste of the smoke around my mouth. "That's what I thought", states Mr G, coolly, eliciting a collective snigger from the crowd. "Now take that fucking thing outside". 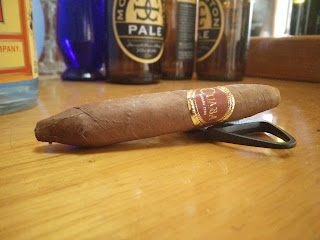 I drain my glass, fix Mr G with a wonky stare, and steal out of the lounge room, shouldering the doorjamb as I make my exit. I head not outside but to the kitchen, where the great central island is covered in every kind of liquor one could imagine. I suck my Divinios thoughtfully, tasting rich berry over still-heavy tobacco, with some spice on the back palate. This is a heavy little smoke that I don't care about drowning out, and it needs a red, red wine to go with it. I leave the Divinios burning on the bench-top while I rummage through the bottles, eventually sourcing a $6 cleanskin red. I crack the top and take a sniff, instantly recoiling at the sulfuric tang that assaults my nostrils. This wine is not to my distinguished palate, and certainly not deserving of even the little Cuaba’s accompaniment. I take a deep drag of my cigar, now fading toward the midpoint, marvel at the enduring berry tang, and head toward the cellar for the good stuff. 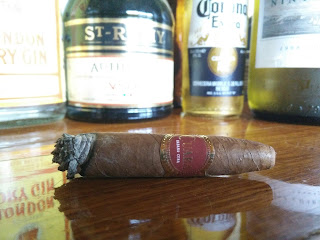 The cellar, which is more of a multi-purpose laundry/bathroom/storage area, is flush with wine. Dusty old bottles adorn the bottom and make way for newer, cheaper bottles on top. The different levels of dusty burgundy contrast like a geolic time scale, showing graduations and promotions and investments and every other occasion where a serious bottle of wine might be cellared. I ignore the ready-to-drink garbage on top, go straight past the more expensive ($10-$40) bottles, and finally hone in on my prize. A bottle of Penfolds Grange, vintage 1970, label cracked and yellowing like old news print, and adorned with imperial fluid measurements. I suck thoughtfully on the Divinios while considering my next move, and note with disappointment that the berry has given way to a bitter bean, with harshening tobacco and increasing tar. I tap my ash in the sink, grab the grange roughly by the neck, and walk casually back toward the kitchen. I pour myself a stiff splash of cleanskin, place the Cuaba on the bench, and get to work. 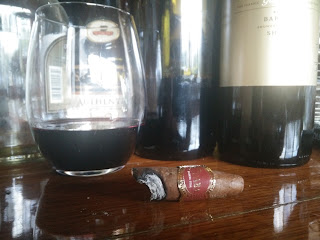 I wonder why the kitchen island, replete with its smorgasbord of drinks, has gone untouched, but the sickly body odour of marijuana that wafts in from the lounge room saves me further rumination. I puff thoughtfully on the Divinios and begin to hack and splutter; I am parched, and can't enjoy the increasingly harsh, tarry smoke without a drink. I fish a corkscrew from the drawer, rip the foil with my teeth, and aim the screw's spiral tip at the alarmingly crimson cork. The cork disintegrates as soon as the screw tries to bite, and the pressure I apply causes a great wedge of cork to break off inside the bottle's slender neck. This Grange has been stored badly, but a wave of laughter from the lounge room spurs my drive to deprive Mr G of his prized Penfolds. I push hard on the corkscrew, disintegrating the cork into the wine, and eventually send the mass crashing into the liquid beneath. I roughly splash a huge serving of Grange into the tumbler that until recently held my dirty cleanskin, and take a deep swig. It is completely corked, and the musty basement aroma makes me gag. Still, this is a $400 glass of red, and denying the greedy Mr G such a bottle makes up for its shortcomings. I puff thoughtfully on my cigar, and note happily that the Grange, corked as it is, is a wonderful companion to the harsh burn of the Cuaba.

Time passes as slowly as it usually does when one is alone at a party, and my little Divinios eventually turns into an unsmokable nub. I leave it to burn itself out on the wooden bench, give my Grange a swirl, and consider my next move. Suddenly Mr G appears, eyes red and wild, stoned out of his head and smiling maniacally. “Davidé, my friend!” he announces, taking my hand in his. He doesn't notice the Grange, and seems to not even notice the cigar smoke hanging in this air. “Come”, he says, oilily, while grabbing a bottle of Johhny Walker Gold. “The action's out here”. I shrug, content to follow, and trot behind him back to the party. 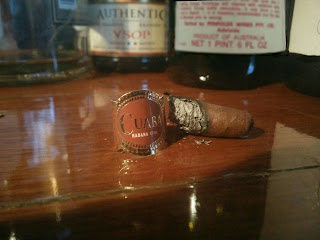