Loathe as I am to break the second dimension, this post is the second of a two-part installment. I strongly suggest you first read the story in the previous post.

It is still high summer in Melbourne, and I have decided that my week of online poker and Facebook trolling should be rewarded with a cigar. The cigar is a Montecristo Esplénditos which has been travelling sans-humidification with my adroit malaprop, Mr G, for many months. My choice of smoke is made purely by default, with Mr G first presenting a box full of handsome cigars to me and telling me to take my pick. I tentatively select a Partagas Salamones, which incites instant chastisement from my host. "You schlump!" says Mr G, thick eyebrows furrowing over his beady, rat eyes. "You know what this cost me? Pick again!". Over and over I select and discard different cigars under the admonishment of Mr G. "PUTZ! SCHMUCK! Are you trying to bankrupt me here?" Finally, brow-beaten and ashamed, I fish the Double Edmundo from the case. Mr G's nostrils flare as he moves to chastise me anew but, perhaps realising that this is the final option, catches himself. "Very well, Davidé", he quips. "Let us smoke". 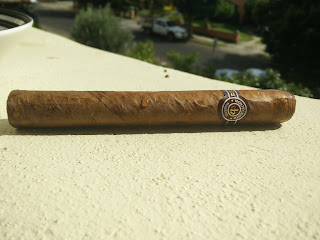 I was standing on a practically deserted Army base, facing off against three armed Iraqi solders, over some water that had been accidentally splashed at me. I was technically outgunned but, at the short distance between us, my 9mm pistol was a serious force multiplier against their long-barrelled M4 rifles. As a mild escalation of force I wrapped my hand around the pistol's metal grip, and had what's commonly known as an 'oh fuck' moment. I could tell immediately by the stiffness of the safety catch that my holstered pistol was not at the action condition; it was fully loaded, of course, but the weapon state for Australian soldiers on base mandated that a round not be chambered. Basically, where I thought I could quickly drop all three Iraqis in a flurry of shots before they could unsling their assault rifles, I now had to first cock the 9mm, which would give at least one of them time to roll to cover and fire at me. My mind raced. How quickly could I draw my weapon, send a stubby round snapping into the breech by releasing the slide, aim, and fire? What if my sweating hands couldn't grasp the slide? What if I get shot in the balls? I noticed the shaking hands and quivering top lip of the guy in the middle, and realised they had no idea of my weapon state. All I needed was the illusion.

The Double Edmundo begins with earthy notes under a slight almond bitterness, all over mild tobacco. The draw is painfully loose, but I'm loathe to build up too large a head of smoke lest the nuances of this cigar be lost. We are pairing our smokes with a huge selection of beer from Germany, America, Belgium, and Czechoslovakia and, should we work our way through them this afternoon, will have consumed the equivalent of a bottle of scotch each. The grey ash of my cigar has only just enveloped the waxy tip, and I have somehow sucked down an entire bottle of Kozel Dark. I decide that eating might slow down my liquor consumption, and I burst open the packet of salt and vinegar chips I lifted from the bottle shop. Mr G's little eyes narrow, and I smile as I cram fistfuls of the tangy potato into my maw. Palate now destroyed, and craving another dimension to the chips, I build up a huge head of smoke from the cigar, letting it settle on my tongue before letting it seep slowly out of my mouth. I detect some tar, but notes of bitter cocoa has replaced the almond, which only complements the salty sharpness of the chips. I blow a chubby smoke ring under the tutelage of Mr G, snap a picture of my slightly peeling cigar, and wander downstairs in search of more beer. 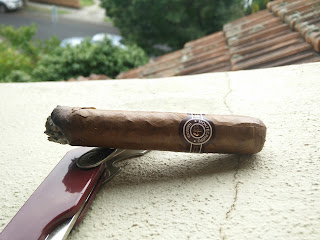 "Gentlemen" I reported, my voice breaking through what seemed like endless silence, and heralded anew the whining drones and far-off rocket fire that raked the Iraqi air. "It seems we are at an impasse". It was a cunt of a phrase to use at non-English speakers, and the Iraqis looked at me dumbstruck. I took one step forward to further reduce their range and, grinning like a madman, drew my pistol. As soon as it was unholstered my left hand came across my body and drew back the slide, readying the little 9mm while making it clear who was in charge. I held the pistol in one hand, and had it aimed just to the right of the group. They had absolutely missed their chance to draw their weapons, but I didn't want any of the trio's more overzealous members rushing for my pistol while screaming some nonsense about Allah. The Iraqis seemed rooted to the spot, eyes wide and mouths hanging open, with all stares now fixed on the patchy black steel of my pistol. I quickly stood side-on, exposing my unarmoured flanks but presenting the smallest possible target, and lined the middle guy up through the iron sights of my pistol. My universe condensed and pulsed in a narrow vortex around the stunned Arab who was faltering fitfully in my sights. I felt my index finger initiating the first pressure point of my trigger, and I felt myself being lulled into a Godlike trance. I was Tiberius. I was Basil II. I was Enkvist and Churchill and Bundy and Bryant and every mad man and God you could ever imagine. I'd never felt surer about anything else in my life.

At the three-quarter mark the draw on the Double Edmundo tightens, and presents anew its bitter cocoa, albeit buried under heavy tobacco. The sour horse-blanket of my Chimay Blue pairs perfectly, with its flat barnyard notes washing down the cigar's bitterness while rounding off its more subtle elements. The wrapper is starting to flake, and the rough thumbnail-cut of the cap is soggy from my moist sucking, but the construction is fairly solid considering its rough storage, and my even rougher treatment. The salt and vinegar chips no longer appeal but, loathe as I am to re-taint my palate, I can't resist salted snacks. Mr G's lip curls as I upend the chip packet into my mouth, spilling salt and chip-chips over my singlet. I wash the chip crumbs down my gullet with a swig of sun-warmed Chimay, and announce to a bored looking Mr G that I desire a dark beer, before staring at him expectantly. Mr G indicates to his still half-full glass of Chimay, sneers, and points a stubby thumb in the direction of the fridge. Fuck this asshole. Time seemed to hang above me in the air, just waiting for me to seal the fate of all present with the squeeze of the trigger, or puss out in order to puss out again another day. Suddenly the pistol grew heavy, and my arm grew heavy and my eyelids grew heavy, and my body armour was squeezing the life from me and I felt thirsty and sleepy. I decided to release the Iraqi from my pistol's sights, but realised that my arms were by my side, and my right hand was barely wrapped around the grip. The three Iraqi soldiers, who only moments before were all but dead, were shuffling past me while talking in hushed Arabic. I dropped to one knee and unloaded my pistol, being sure to replace the once-chambered round in the magazine, before securing the weapon, loaded, into my holster. I stood up, walked three paces, and vomited my meal of goat meat and coleslaw all over the path. I thought of the standoff, which had taken maybe 10 seconds, but had seemed to drag for hours, and heaved and wretched until nothing but bile and saliva were dribbling down my chin. My eyes smarted with tears as the last eight months of boredom and stress and shame bore down on me, all condensed into the fidelity of this one, raw moment. I couldn't even kill one fucking Iraqi.

The sun is starting to set, and I am heavily toasted and hoarse from smoke. Still, I maintain a three-fingered grasp of my cigar to keep the rapidly peeling wrapper intact around the waning Double Edmundo. Mr G has long since finished his cigar, and is regaling me with Zionist race theory, the glorious rise of the alt-right, and his threshold for when a woman's rejection should actually be taken seriously. I taste rich, luxurious tobacco that is only enhanced by the heavy tar that comes wafting through the frayed cap. I end by peeling layer upon layer of wrapper from the nub, sucking until it bursts into a cloud of hot ash all over my hand, absolutely spent. A fine smoke. 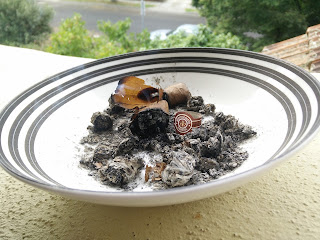