This summer sun, dear reader, is no longer welcome. What was a gentle warming of my old bones has become an unrelenting barrage of often simultaneous sickly humidity, searing heat, and a glare that has me cucked to my core as I scrape under its pervasive gaze. The worst part is my daily hangovers, into which I wake on my damp, soiled mattress, and must navigate painfully as my doings necessitate. The heat last night has sucked the water from my head, leaving my brain to flop limply against my skull, around which it is now rattling painfully as I brain-shake it awake. The heat is so intense that I can't bear the thought of hot coffee and, in an effort to stave off my caffeine withdrawals, I splash ageing UHT milk over instant coffee, before gulping it, gagging, down my gullet. I feel the cold milk leak out the corners of my mouth and down my chin as I retch on the bitter granules, and I fight to quell the rising bile as the icy cold liquid hits my churning stomach. Guiltily I crack open a beer and, wincing down the first icy cold swigs, wander over to my humidor. I lift the lacquered lid and select one of many similarly low-priced cigars, and sit at my old desk. I am hesitant to smoke inside but the heat, my headache, the growl of my gut, my almost reflexive need for chemical relief, and the crippling hopelessness, have decided for me. I snip, fire, suck, and blow. Consume and expel. Inspiration and exhaust. A meta for the metaphorical breathing, drinking, shitting, pissing man, living to die, and feeling nothing. It's a Hoyo de Monterrey Du Prince, I believe. 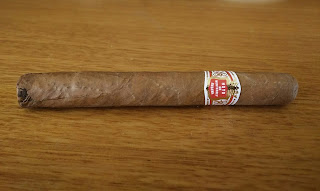 I have had a few friends die in my life. Mostly young, and always unexpectedly. A death from my distant past that has haunted me in particular of late is that of my high school friend Han Wang, who attended my high school in the years before I dropped out. Han was the son of a wealthy Honkinese politician, and found it more awkward than most to fit in amongst the Australian teenage yobbery. My inherent racism prevented any sort of friendship initially, but a particular event in middle-high school impressed me so much that I figured I'd want this kid in my corner some day. We were waiting for a bus to take us to one of my school's many mandatory sport days when one of the many bullies, Ben Margiannis, decided to target Han. Margiannis, in prison at time of writing, pushed the unassuming Wang in front of our approaching bus. Han never lost his balance, and stood confused as the decellarating bus bore down on him. The screams, the air horn, the hydraulic screech of brakes and the shriek of rubber against asphalt all melded into one horrific clangour that died with a gasp as the bull bar sent the gentle Wang flying sideways, landing meters away with a cracking sound, only to slide a further bus-length on his thick school blazer. The P.E. teacher who witnessed the attempted murder, Mr Tim Ellis, yelled at Han to "stop fucking around", and a relieved giggle arose from the crowd as Wang, shaken, returned to the fray. 'This kid is invincible', I thought as I shot him an impressed smile. Sheepishly he smiled back, and would later loan me $5.

The Du Prince is a well constructed cigar, despite the damage this one has endured in storage. The draw is perfect, the tobacco smooth, and the tar minimal. I taste some spice, but there is an enduring comestible tang that tastes of old Big Mac. I roll the smoke around my mouth, and realise that my teeth, unbrushed for at least a week, may be contributing to the off flavours. My current poverty dictates that I pair my cigar with an old, heavily infected, band-aidy home brew, which cloys on my palate in a thick smoky saliva paste. I feel a pang of guilt at my cigar collection, which stands in outrageous contrast against my crippling debt, both private and institutional. I suck too deeply on the Du Prince and detect a tannic chemical burn, and ponder my position. I drain my home brew, lay the smouldering Du Prince on a bottle cap on my filthy floorboards for a quick photo, and run on to the fridge for another beer. 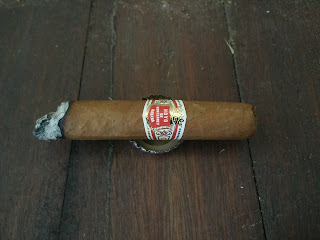 "The Invincible Wang!" I would cry, regardless of location or company, whenever Han would approach. He would smile and bow foppishly as my other moron friends debated the actual invincibility of such a panty-waisted kid. But I remained convinced, and found the wealthy Wang to be not only a valuable source of answers to my consistently terrible math homework, but also a good source of interest-free, electively repaid, loans. At age 16 I decided that high school was for retards and fuck-ups, and worked instead as a kitchen hand until fate forced me to pursue my year-12 equivalency at TAFE. Of course this was long after my high-school friends had graduated, and even longer after they'd forgotten about me.

At the midpoint the Du Prince is coming good, with hints of sweet white pepper, some clove, little tar. Dominant of course is fairly bland mid-tobacco, but there's little to complain about cigar-wise. Do I regret the $500 worth of cigars in my $1600 humidor? Maybe. It's more the guilt than anything else. I have no money, and my only assets are combusted on a weekly basis. I owe Mr G about $400, about which he harangues me daily. I also owe the notorious Buckley $5, about which he has forgotten. I'm suddenly awash with resumed sadness at my situation and, terrified that my parasitic habits will drive my isolation further, fire off a conciliatory text message to Mr G. I just need a mate right now. 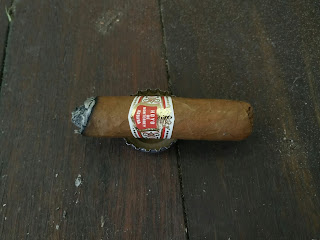 A few years ago I was browsing the domestic beer at the local bottle shop when I ran into one of my high school friends. We'd both been staring at one another off and on, clearly trying to establish where the familiarity lay, until we eventually performed a tandem head-cock and mutually engaged. We did the usual awkward catch-up; he doing some consultancy garbage, and me doing myself the usual disservice on the internet. We were running out of conversation as we approached the counter, when he hushedly enquired if I'd heard of Han Wang's fate. I answered in the negative, and was informed that Han had come out as gay to his father shortly after graduating high school, been instantly disowned, and hung himself from his doorknob that night. How my long-estranged friend knew this I'll never know, as he quickly backed out of the store promising coffee one day, and will likely never be seen again. Still, it rattled me to my core. Han Wang, the invincible kid who survived being hit by a bus, was a woofter. Gross.

My filthy apartment is now filled with a haze of grey cigar smoke, and my lungs crack and wheeze as I draw breath between drags. The Du Prince is finishing strongly, though it could be a little less temperate. It's mostly heavy tobacco, some tar, a little spice. The construction is first-rate, allowing me to nub the sucker with fingers relatively uninflamed.

The problem with smoking in my apartment is I have no retreat. I'm where I would otherwise return to, and it's horrible. I have demolished my refrigerated beer without the forethought to refrigerate some more, but the still-searing heat has sealed my next move, and I too-enthusiastically crack a tepid home brew. It's rinse and repeat here, my friends. I'll hopefully see you in a week. 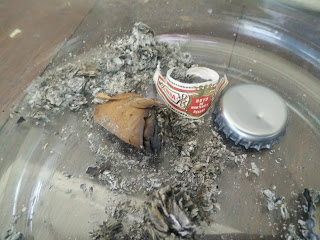