I'm still in Darwin, and have found myself in a nightmare hell-pit called The Cav. I visited this city ten years ago when it was a sleepy and fun seaside village. Since then the Army have properly moved in, and the place is now high-rise hotels and kitsch strobe-lit storefronts. Worst of all are the fat, loud, idiot race traitors, draped in gold chains, chewing with their mouths open while dragging their screeching Filipino wives around by the wrist. It's with this disdain for my countrymen that I've planted myself in the middle of the beer garden with a Montecristo Open Eagle. I'm not the only smoker, but I get plenty of sideways sneers as I clamp the cap between my teeth and set it ablaze. I'm instantly greeted with mild tobacco, a slight citrus tang, and light tar. 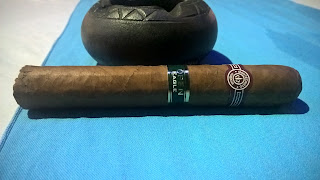 At around week four of basic training we deployed to the field. I was a weak soldier with bad knees and no stamina, and I was dreading having to carry my pack and sleep in the bush and get yelled at by Sergeant Pettigrew, my small-group instructor. I was scared of snakes and spiders, and I lived in constant dread of accidentally discharging my rifle (a negligent discharge, or N.D.), or sleeping during my watch, or losing one of the expensive pieces of equipment that was entrusted to me. I was aching and my boots fit badly and I had a cold sore from the stress, and my platoon mates were tiring of me hiding during hard tasks, and for dobbing them in for smoking after lights out.

In the first inch I get hints of woodfire, but the citrus has developed a harsh, bitter, edge that makes me wash my acrid saliva down with big swigs of lager. I'd no sooner resigned myself to greedily chasing each draw with a large swig when, at the 3/4 mark, I'm hit with a malty sweetness, like coca-cola residue that's been left in the sun. Its stay is short-lived, however, and I plot my next run to the bar. 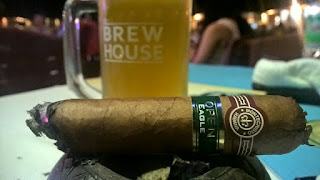 One of the worst tasks a soldier can be assigned is the digging of 'pissaphones', which are large steel witches hats that are buried upside down in the earth, and hide the stench of urine when a camp is vacated. I and two others were chosen to dig the pissaphones into the earth in the center of our platoon camp, and I recoiled in disgust. Thinking on my feet, I instantly held my head and complained loudly of an "awful dehydration headache". Deyhydration and heat illness were huge issues at the time, and a lurking Corporal ordered me to sit in the shade and drink water with Gatorade sachets until he told me to stop. I sat in the afternoon shade guzzling liters of the sweet mixture while watching my two co-workers dig the stinking metal into the hot, dry, earth. "You're a useless jack cunt, Davidé", came the strained rasp from one sweaty soldier. I smiled, winked, and took a long swig from my canteen.

At the half-way mark the Open Eagle's draw becomes frustratingly loose, and I can't taste anything without building up a fitful head of smoke before drawing, which intensifies the tarry bitterness. It's also adding to the smoke cloud I'm producing, which gets caught in the light breeze and wafts gracefully into the neighbouring table's plate of oysters. This isn't the best-regarded cigar Montecristo has produced, and my feelings towards it are so-far ambivalent at best. 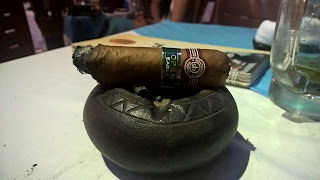 That night, while huddled in my freezing sleeping bag, I was overcome with the need to piss. It was around 0200h, and I knew nobody would be awake except for the soldiers who were rostered for sentry duty. I squirmed out of my sleeping bag and into my boots and, steeling myself against my straining bladder, stole into the blackness of the bush. After a few steps I remembered that my rifle was still next to my pack, and to be caught without it meant serious punishment. I was about to burst, and made a frenzied gallop in my unlaced boots back to my sleeping area. I was on my hands and knees digging around in the darkness for the familiar plastic and steel of my rifle. I had tears streaming down my face and was making desperate whimpering sounds at the injustice I'd been dealt. Finally, just as the first trickle of hot piss was about to leak out of me, my hand wrapped around the smooth pistol grip. I yanked it away and recoiled immediately from the sudden burst of flame that exploded out of the muzzle, chased by the crack of a blank round as it raced to catch up with the light.

I was in a half squat, holding my breath while piss cascaded down the legs of the only trousers I had to wear for another ten days. After what seemed like eons, the swing of a torchlight hit me square in the face. As my eyes adjusted I could make out Sergeant Pettigrew, flanked by the two sentries, as they surveyed the situation. The stink of urine and cordite filled the air, and I made no attempt to cover my shame as the torchlight travelled from my ashen face to the ever-expanding wet patch at my crotch.

In the final third the draw has loosened to the point where smoking is nearly impossible. The burn is uneven, and I taste only harsh tobacco. A disappointing finish for what wasn't an initially bad smoke, and one that has at this point has been out of its humidor for the better part of a week. Still, I expected better, and the fitful little Cuban disintegrates in my fingers as I draw finally into its slack nub. Fuck Darwin. 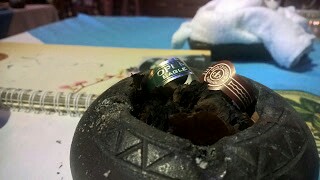