It's an overcast February day in my employer's manor, and we are enjoying a lazy smoke in the waning afternoon light. I've done little in the way of work today and, though Mr G is aware of my idleness, I act exhausted and swig my beer with more than the usual urgency. We are each armed with a Partagas 8-9-8, and have an assortment of American pale-ales between us. The topic of conversation is Mr G's new watch: an Omega Seamaster that he picked up at auction, and he loudly lectures me on the nuances of luxury vintage timepieces. I occasionally interject by showing him the features on my digital Casio, at which he flares his large nostrils while further narrowing his dark, beady little eyes. Moving past our awful dynamic, the 8-9-8 is a beautiful thing. Long and thin, with a gentle taper from tip to cap, with construction that at least rivals the best cigars I've smoked. I take it to the flame, and am delighted as sweet clove caresses my palate, over smooth mid-tobacco. 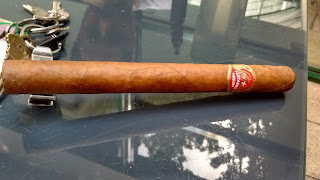 I eventually found myself on a four-month deployment to an air base in the Al Khatim desert, between the Dubai and Abu Dhabi emirates. My pre-deployment training passed in a blur, and before I knew it I was on a C17 bound for the U.A.E. The months dragged, and I spent the long days standing on a rifle range in 50 degree heat, trying to teach spoiled, fat, Emirate brats how to shoot. The nights were no better, and I would spend them alternating between drinking alcohol-free beer, and running security picquets around the vast air base. The only thing sustaining me was that I was soon flying out of that boring desert wasteland and into Iraq, where I might at least see some action. One hot, dry evening a siren blared across the range, comprising short honking sounds, interspersed with "stand to" in a robotic American accent. A dead soldier was inbound from Baghdad.

I recall purchasing these cigars as part of a bulk order from Switzerland, with the first order being sucked into the void of Australian customs. The seller was kind enough to re-package the same order in more discreet packaging, and eventually made it through customs and into Mr G's giant humidor. I'm thankful that these were saved from the old tupperware containers I use for cigar storage, as the complexity has shone from the start. The first inch of the 8-9-8 burns slowly and evenly, with the clove evolving into a sweet pine sap that mellows eventually into a gentle wood-fire. The draw is perfect, and I'm loathe to wash my smokey draws down with swigs of sickly American ale. However, I still do, and the caramel from the ale cloys on my palate and gives the 8-9-8 a tartness that I wash down with yet more beer. Mr G, who has hardly touched his first bottle, warns me that there will be no more beer when these are done. I bare my teeth, and sulkily suck on my cigar. 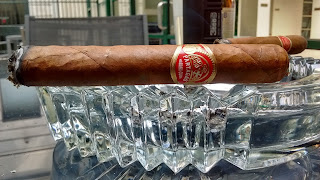 I ushered the whining Arabs off the range and made my way to the air strip. I arrived just in time to see a casket, clad in the Australian National Flag, be solemnly carried down the loading ramp of an idling C-130. The light was quickly fading, and any exposed steel from the casket flashed yellow in the gathering gloom. My radio crackled to life, and a muffled voice ordered me (or, rather, my callsign - Flounder) to the morgue. The morgue was simply a large, refrigerated shipping container with a bank of human freezer drawers, and was situated at the furthest point from the airfield (presumably to stop soldiers waiting combat insertion from seeing a functional morgue before deployment). I trod sadly to my duty, and arrived as the steel casket - now stripped of its flag - was being shunted roughly into its drawer. "Settle in, kid", said the accompanying sergeant-major, "you've got first watch".

I'm on my final beer, and am feeling panicked as I realise that I do not have enough to last me for the rest of this giant cigar. I look at my employer, who is sipping his second beer and eyeing me vindictively. "You can't control your drinking, Davidé" he says with a smirk. I tell him to mind his own fucking business, grab my keys, and make for the bottle shop over the road. Doing this means leaving the remaining half of my 8-9-8 to wallow in its own smoke for a few minutes, but I'm curious to see how it progresses anyway. I select a six-pack of the cheapest beer I can find, and steal back to the courtyard. I blow hard through the cigar, relight it, blow again, and am delighted. Mild tobacco, some bean, and a dominant floral tang flood my palate, which I wash down with the remaining half of my warm beer. This cigar is phenomenal, and I feel a burst of genuine happiness as I recline and twist the cap off a fresh, cold, beer. My beer, the consumption of which cannot be dictated by any other. I share the Partagas with a cool evening breeze as the 8-9-8 fades past the band. 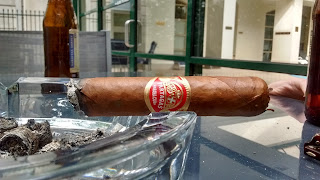 Morgue duty is awful. Out of misplaced respect for the dead, there are no televisions, and the short notice meant I hadn't time to retrieve any books. So I sat, slumped at the desk with nothing to do but watch the clock until my next hourly check on the thermostats. The night was freezing cold, and the icy desert winds groaned and howled as they passed through the vast canvas hangars of the nearby airstrip. Freezing and impatient, I decided to check the thermostat early as an excuse to get my limbs moving. Just as I reached the shipping container's door I heard a muffled whisper of "don't go". I froze in place, one hand on the metal swing-arm, and the other poised to heave the heavy door open. "Don't go", came the voice again, clearer this time, and with an added urgency. Terrified, I wrenched the handle to ensure a quick escape and, turning around, saw an Australian soldier kneeling at the foot of the freezer. He was small, with a kind but sad face, and dressed in heavily soiled camouflage.  All I could think about was getting out the door to the thermostat and, as if reading my mind, the soldier shook his head. "Don't go" came his voice. He must have seen the understanding sweep across my face, for he appeared to fly back, as if hit with a bullet, and faded quickly into nothing.

Two days later I strapped myself into the same C17, bound for Baghdad.

In the final inch the Partagas 8-9-8 takes an interesting turn, with distinct maraschino cherry cutting through the heavy tobacco. The light is fading, and Mr G and I have turned to our respective devices for entertainment. I slip the band from the slowly depleting nub, and suck with increased fervour. Tar only now starts to develop, and the maraschino fades into the familiar bitterness of a premium cigar at the end of its life. I swig the last of my cheap beers, take the final photographs with my ageing phone, and bid my good employer adieu. It's a long trudge back to my apartment. 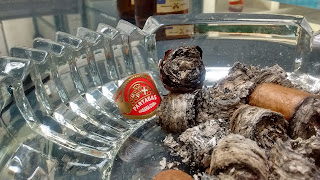