Predictably, the shiny shekels with which I arrived in Darwin have dwindled into chump change. I drank nearly every cent, and have been forced to slink south in shame. I could only afford to make it as far as Alice Springs, and I spent the long, hot, bus ride watching the lush forests turn to dry, red dirt, while eating can after can of tuna. After 14 hours the bus has finally stopped for the final time and I, kicking my tuna cans into the aisle, have stepped into the waning Central Australian sunshine. Sore and exhausted, the only thing I want is to alter my senses, and I buy the cheapest flask of vodka I can find at a heavily-guarded bottle shop. I empty the flask into a warm bottle of coke, fish a Romeo y Julieta No. 3 out of my backpack, and set off on foot to explore the town. 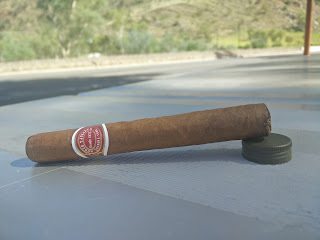 My first few months in the Army dragged, but I finally found myself on the last day of recruit training, marching onto the parade ground with the battalion to rehearse the graduation parade. I'd made it through the entire three months and, despite being loathed by peers and staff alike, was set to emerge relatively unscathed. I was daydreaming about graduating and being sent to the advanced training school where I could finally start anew, when my musings were interrupted by the shriek of "HALT" by my drill sergeant. The entire recruit battalion, around 600 soldiers, was to be addressed by the Commandant, Brigadier Calles, whom we were turned to face. As I completed by turn I noticed a set of old-fashioned slide scales on the dais at the head of the parade ground.

The little No. 3 starts reasonably well, with bitter walnut over mid tobacco. This cigar has traveled with me from Melbourne, and has aged well despite enduring rapid temperature changes in the bottom of my filthy backpack. The late afternoon sun hangs high in front of me, scorching my face and forcing rapid swigs of my warm vodka. I still need to find a hostel, but for now I'm enjoying the familiar tightening in my temples as the drink and leaf go to my head. Rapid sucking has replaced the No. 3's nutty overtones with heavy tar which, despite my negligence, is disappointing so early in the game. I rest the remaining two-thirds of the cigar on a rock and squint pensively into the sun. 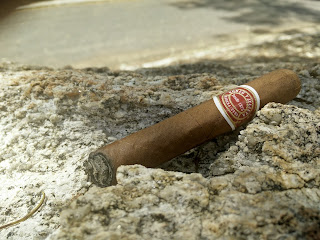 Due to my habit of faking injuries, and constantly sneaking extra desserts in the mess, I had started to stack on weight. It was hard to tell from my slight shoulders and skinny legs, but I had a barrel-shaped gut that flopped grotesquely over the waistline of my dress trousers. The Commandant, an old-school, wiry, special forces Brigadier, had decided that a public shaming of any unfit recruits was just the ticket. He marched along the ranks and selected the fatter soldiers to go waddling up to the scales for a weighing. He stopped at the rank in front of me at a portly young lad named Baudeville, or 'Buddha', and told him to get weighed. I couldn't contain my excitement, and burst into a stage-whispered "SUCK IT BUDDHA YOU FAT SHIT", as Buddha tottered across the vast parade ground to the scales. Eventually the Brig snaked his way to my rank, stopped smartly in front of me and, without looking in my direction, sneered "get up there you bag of shit". The snickers of 'piss boy' echoed behind me as I slunk sadly toward the scales.

I'm about half way through both the vodka and my cigar, and am feeling nausea wash over me as the weight of my situation kicks in. During the bus ride Alice Springs felt like a destination. An end-state. But I'm here with no money, no skills, and a depleting phone battery, and at some point I need to get back to Melbourne. My ruminating has led to neglect of my cigar, and a shaky relight brings forth the bitterness of the smoke that's settled within the leaf, which fades quickly into bland, mid tobacco. I'll note that, for an AUD$23 cigar, the construction is flawless, and the burn is, at worst, satisfactory. My vodka and coke combination has warmed to the point where it cloys instantly on every deep draught, coating my palate and making the Romeo's increasingly heavy tobacco work hard to be tasted. 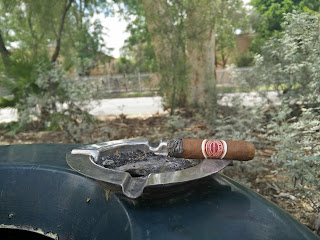 My face burned with shame as I marched in front of the entire battalion to my weighing. I could feel the stinging sweat dripping down my thighs, the pinch of the thick parade belt under my gut, and the grinding chafe of my rifle's sling on my collarbone. The last three miserable months weighed on me, and I vowed to become a better soldier. I vowed to lose weight, to participate in at least one full PT session, and to turn myself into a chiseled war machine. I lifted my head and grinned a maniacal grin as I ascended the steps of the dais. The beam scale loomed in front of me, flanked by two warrant officers who eyed each other as I approached. A voice, somewhat like my own, boomed a sudden "morning, gentlemen!", with a volume that startled even myself as it echoed throughout the parade ground. The warrants fumbled and talked over each other as I stood straight on the scale, adjusting the slide myself until it wobbled between the two beams. "A lazy 95 kilos" boomed the voice again, this time punctuated with a fingernail tapping on the plastic of a rifle, "what now?". The dumbfounded Warrant Officers meekly sent me back to the formation, where I stood, eager for the coming recast. This piss boy was to become a piss man.

The way my head spins and swims reminds me that I did not drink any water on the long bus ride, and I've just rapidly introduced a sizeable dose of nicotine, alcohol, and caffeine to my exhausted and dehydrated being. The final inch of the No. 3 is wonderful, with bitter coffee bean overwhelming the heavy tar, making each deep drag smart the back of my throat. The Romeo y Julieta No. 3 was not remarkable, but its good points outweighed the bad. Unlike any other cigar blogger in the world, I smoke my cigars until they are wet, fragmented, tarry nubs, and I make no exception for the No. 3. My fingers, unable to grip the remaining coal, drop it into the dry grass where I've been sitting. It's time for a drink. 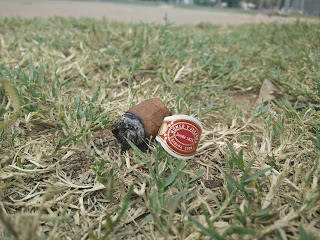