And so you're back. Perhaps you spent the winter around a fire with friends, smugly telling off-colour jokes while smirking at your own indelicacy. Perhaps you went on holiday to someplace warm, where brown feet frolicked over the scalding sands of pristine beaches with a tanned beauty, salty and happy and in love.

Perhaps you spent it like your sturdy host: holed up in a rented apartment with an old blanket wrapped around his legs, drinking off-brand instant coffee and watching the midday movie on channel seven. Alone.

Either way, welcome, friends, to the second season of Fitful Fires. The warmth is returning to eastern Australia, and the leaf, grape, and grain beckon once more. I start us off with the Montecristo Open Junior.

I am sitting in the lush backyard of my good employer, Mr T.G., recently returned from filching cheap sculptures from African tribesman, which I will soon haul to auction houses to hawk at massively inflated prices. We have not spoken for months, and he smirks cruelly from his deck chair as I timidly present my little Junior. "If you think you're wasting my jet lighter fluid on that garbage" he sneers, "then you're as oblivious as you are thick", and sends a Bic lighter tumbling toward me. He blows lazy smoke rings as I fumble with the flame, and the Junior hits me with a rush of clove over a retronasal coriander tang. I adjust my weight on the wooden bench and settle into the night. 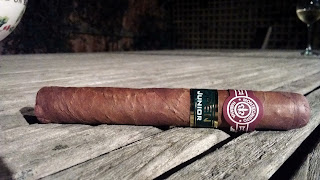 My employer and I were friends long before we were colleagues, despite our different upbringings. He spent his twenties studying business at university, while I played an Unreal Tournament addon called Tacops on my aging Athlon 1100. Our paths eventually crossed through the notorious Buckley, and we developed a foul and erratic association, filled with jealous womanising and spiteful aspersion. On graduation he started to make money - real money - the type that allows one to start grand cigar collections while still being technically unfit to hire a car, and he dressed almost exclusively in bespoke suits. After some years I started to tire of our disparity, and sought fortune of my own. However, with half an Arts degree and no meaningful skills, my only choice was to join the Army. I enlisted sadly, and in secret.

The Open Junior's herbal notes soon give way to sweet petrichor over fine, mild tobacco. The draw is perfect, and the cheap white wine I've paired it with is nauseating by contrast. I openly praise the cigar to Mr G, who coolly tells me to look up some reviews online. I find page upon page of smug vitriol against the Open Junior, each reviewer deigning to outdo one another in contempt for this little cigar. I look at my employer and surmise that the detractors must be retarded, at which he sneers and spits. I lazily suck the junior and detect coffee bean, but with a creamy undertone, as the cigar burns calmly toward the midpoint. 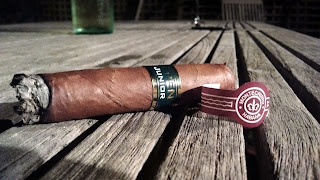 I tried to catch up with as many people as I could before departing for basic training. I was expecting a cross between astonishment and admiration, but I mostly received a slack-jawed "oh" and a rough prediction of how badly I was going to suffer. Mr G was privy to my plan, and had proposed that we have a final dinner in the city before I left. I had decided, Mr G in mind, and since this was to be my last time out in Melbourne, to scorn my usual trackpants and surf-branded t-shirt in favour of something more elegant. I donned a pair of dark jeans, work boots, a casual shirt, and the jacket from my only suit, and strode out of my house feeling like a freshly-fellated Jay Z. I strode confidently into the Chinese restaurant and found Mr G with another friend, T-Rex (Vale), both dressed to the hilt and sipping a '96 Bollinger.

At the midpoint the Junior's creamy coffee gives way to notes of bitter espresso, which fade as quickly as they come into intense cacao over mid tobacco. By this point I have greedily guzzled all of the white wine, and have just impudently requested some beer from my host, who wearily obliges. As he retreats to the refrigerator I shout that I can taste strawberry and rockmelon rind, but my words are met with a slammed door. The cigar is burning too hot because I am drawing on it too frequently, and any complexity becomes masked by the acrid smoke that results. I rest the cigar on the ashtray, put my feet on the table like I own the place, and await my fresh beverages. Life, for now, is good. 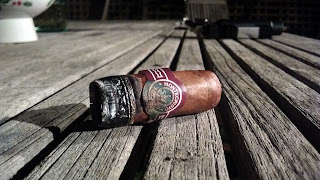 I was striding to the table with my cleanskin shiraz when Mr G raised his head and looked me up and down. His eyes settled on my suit jacket, and a vicious and delighted grin spread across his face. His nostrils flared, he leaned back in his seat and, regarding me over his long nose, burst out into ferocious laughter. I was bent over to plonk my wine on the table and could feel the eyes of every  diner boring into me as my friends loudly drilled me on my clumsy attire. I sat in shame and ate my food, trying at every turn to change the subject. Eventually the check came, and I suggested we go somewhere for a final drink before I shipped off to the Army. "Nah" remarked my now employer, "not in those boots mate".

In the final inch I detect tar, and I find myself alternating outlandishly between smoking and swigging beer, at once drunk and buzzing with nicotine. My employer holds a beer between his thumb and forefinger and reminds me that I am smoking the band, and I discover that he is correct. In fact I had, in my drunken stupor, only recently singed the secondary band, making me wonder why I left the Montecristo band to the mercy of my smouldering coal. I remove the charred, tattered band and choke down the now harsh, tarry remains of my little Open Junior. I smoke it to a soggy nub and, fumbling with my phone, try to make the final picture worthwhile. This is not just one of the best cigars I've ever smoked, but is one of the best things I've ever consumed. Anybody who thinks otherwise is dangerous or stupid. 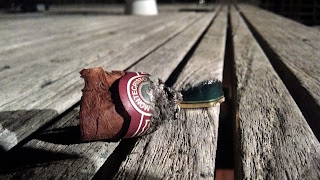