How the seasons change. It feels like only eight months ago that I last laid bare my soul to the cigar world, regaling you with stories of war, shame, and isolation while reviewing stubby rubber-fires that passed for cigars. But there have been some changes around here during the freezing winter months. While I'm sure you have been curled in front of a fire, mulled wine in hand, drawing your true love closer while rain pelts the window, the team here at FFHQ has been working tirelessly in preparation for this coming season. The finest cigars have been sourced from the cheapest possible places. The servers have been bolstered, the salt'n'vinegar chips have been re-stocked, and the deep crimson blood that I hacked up every morning has diminished to a viscous brown catarrh. As you may have guessed, the time is nigh for new beginnings.

I extend a warm welcome to my dear friends, gentle aficionados, and Bulgarian referral-spammers, to Season 3 of Fitful Fires. We kick off with a review of the H. Upmann Regalias.

It is a fitting first coming together of two of my rare and regular smoking companions. Mr G, who has once again opened his grand courtyard to our depravity, sits reclined, gold chains shining resplendent through his thick chest hair, and barely acknowledges anyone. Dayu, who is visiting from Osaka, has joined us, and we make polite chit-chat about whatever depravity we last got up to in Japan. I will be smoking my first ever H. Upmann, a Regalias, and remark to my friends that I would like to set it ablaze. "Davidé", came the oily rebuke of Mr G. "Dayu has brought us some cheese. Show some  restraint". It was delivered so coolly and in such contrast to my own excitement that I could only shamefacedly busy myself in photographing the rich, brown, veiny Regalias while Dayu, embarrassed on my behalf, gently produced his cheese platter. 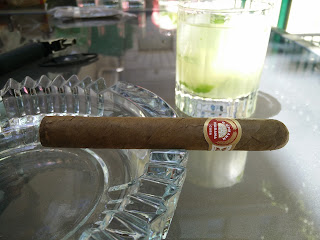 I was last in Japan in 2013, which was the best and worst year of my wretched life so far. I spent 28 days of every month in the outer suburbs of Adelaide, seeing out my last contracted year in the Army. The remaining few days were spent in Melbourne, basking in the light of a woman that, inexplicably, had consented to a long-distance relationship with your grubby author. And so my one-week trip to Osaka for the notorious Buckley's bastard interracial wedding was a time of confusion for me. A week away from my paramour didn't bother me so much. However, on a night out with Mr G, Dayu joined us with a Japanese Goddess on his arm; an event that would change my life forever. Enter Yuri: the most confusing thing that has ever happened to me in my entire, awful, existence.

The cheese platter now yellowing and sweating in the sun, and my shame slowly fading as I sip my mojito, I chance another request, hat in hand, to partake in the leaf. Mr G squints his beady eyes at me, purses his lips into a sharp point, then makes a fricative squeaking sound as he ingresses air through his slowly exposing fangs. I take this as consent, snip the cap of my cigar, and smartly set it  alight. The Regalias starts well, with mild tobacco over traces of damp wood. The construction so far is excellent, wrapper thick with veins, giving it a heft that belies its small size. I drain my mojito and fill my glass, replete with ice cubes, mint leaves, and a lime wedge, with a cheap German pilsner that has spent the summer warming in the boot of my car. I note that the draw of the Regalias is excellent, the burn razor sharp and, despite my wanton sucking, it surprises me with a hint of cream before the tobacco harshens slightly as it burns crisply to the midpoint. 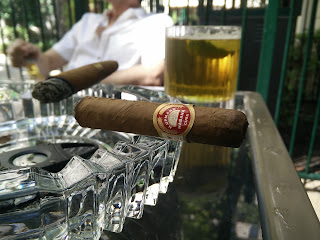 To describe Yuri is almost impossible using the spoken word, because one just falls over oneself with adjectives and parallels and anguished groans while others in your midst who may have met her interrupt with their own clumsy descriptions. Basically, you take your stock-standard Japanese girl, imbue her with the bratty mannerisms of Sailor Moon, give her Angelina Jolie's proportions, surgically enhance her eyelids so her eyes become like deep, moonlit lakes, then dress her like Sophitia from Soul Calibur. I have re-written the preceding sentence twenty times and this description does not even come close to doing justice to her overall hotness. She's a sultry Bond girl and an anime wet dream and an overdone cam-girl all rolled into one. You get the point.

I was instantly smitten. She sat down opposite me in a restaurant and, obviously used to dealing with drooling men, cocked her head and smiled and applied eye drops to her gigantic eyes and imprinted in me a standard that no girl, no woman, no being in this earth has even come close to matching. She spoke limited English, and over the coming week would grab my arm, ply me with drinks, and scoff dismissively when I told her I had a girlfriend. I don't believe her interest in me was real, but instead serving to add to a network that might one day converge to keep her in riches for life. However, it felt real and, as I drank myself into a stupor with her every night, and nursed myself with more booze every morning, that wretched week in Japan fostered in me an obsession. I would lay on the Tatami in Mr G's suite and wax poetic about her. I would try to distract myself by sending unanswered emails to my indifferent girlfriend in Melbourne. I have an addicts wiring, and Yuri was the bitter poison that I thought I needed.

At the midpoint the Regalias impresses me still. Mid tobacco dominates, with an occasional cocoa bitterness, some coffee bean. The burn remains as if cut by laser, and despite my inattention no relights have been required. I am drinking my pilsners as fast as I pour them to mitigate their rapid warming in the summer sun, and I find myself slurring to my companions about what fleeting thought my boorish mind came across. I recline under the gaze of Mr G and suck deeply on my Regalias. The draw catches the back of my throat and I make a grotesque, open-mawed gag to rid the smoke from my windpipe, noting undertones of burnt vanilla against increasingly bitter bean, before I wash it away with a large swig of tepid beer. I turn to Dayu and ask the question he knows has been smarting the tip of my tongue since we sat down. Dayu smiles. "Yuri's good, man. She's still waiting for you". I grimace, and peel away the wrapper that is starting to fray at the foot of my cigar. That wasn't what I wanted to hear. 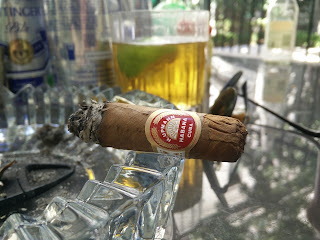 Unfortunately I'd been to Osaka before, so the museums and other sights were directly competing with the many tiny bars that litter the Sinshaibashi district in which I was staying. I boozed. I mourned my clearly dying relationship back home. And I steeled myself against the temptation presented by Yuri. Her every grab of my arm, her flirting in broken English, her eyes that widened and sucked in my very soul when something caught her interest, all bolstered my resolve. I knew it was all pretend. I knew there was no real interest on her part, and I was still madly longing for my relationship back in Melbourne to regain its spark. In a desperate effort to make her dislike me I showed her the tattoo adorning my back, which is a giant and accurate depiction of the Fat Man atomic bomb as it hurtles toward a tiny outline of the Japanese islands. She recoiled with a hurt look on her face then, realising I'd realised my mistake, smiled and cocked her head and pointed toward my drink. She rubbed my back as I drank deep from my umpteenth beer of the day, wretched and repentant and, under her tiny hand, absolved. I returned to Melbourne the next day, uncorrupted by the flesh, but with megatons weighting on my slumped shoulders.

It has been many months since I last smoked, and the nicotine is causing my temples to throb while the alcohol, having long since loosened my lips, makes me press Dayu for photos, text messages, anything that might let me relive the dream state that was my time with Yuri. I reflect now on the willpower I showed in not once pursing her, making a move on her, or succumbing to her seduction. But willpower is easy. We demonstrate willpower daily by not yelling at strangers, or pushing people onto train tracks, or punching our bosses. True strength of character is surely in being able to let go of what one cannot, should not, have. Years have passed and I'm still the obsessed creature I was, sucking down beer while sabotaging my own happiness, this time by fuelling my obsession, rather than quashing my interest. The H. Upmann Regalias has been a fine accompaniment to this jumble of feelings, this menagerie of emotions, this hodgepodge of homologues. I grasp the nub between my rat nippers and suck until the wrapper finally disintegrates, a scoundrel clinging to the only pleasures left in a feebly lived life. 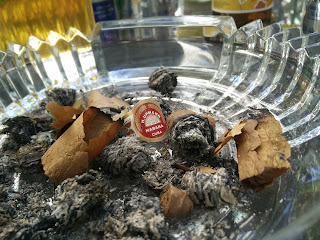