Your sturdy host, it seems, always lands on his feet. Three nights in the desert were enough and, with only the help of a begrudged loan from my benevolent employer, Mr. G, I find myself back in Melbourne. We are seated in his ward room and, with conversation running quickly stale, I shyly remind him that it is indeed my birthday. Mr. G clapped twice, turned on a tiny heel, and left the room, returning a short while later with a luxurious, red-lacquered, humidor. "Take anything from the top" he ordered, adding "I'll bring some drinks down to the courtyard". When the kindly Mr. G's footsteps had padded away I lifted the lid, and was disgusted with what I saw. Some Cuaba Divinios. A Monte 4. Assorted Central-American garbage. Was he seriously going to give me petrol-station fare on my fucking birthday? I cast the top shelf aside, and find an assortment of huge, old, heavily veined, cigars. Some are in little cedar boxes. Some are sealed with wax inside oily cardboard. All, at least, were distinctly special. An unbanded cigar catches my eye and, as I yank it from the humidor, an attached tag swings into view: Cohiba Behike BHK 52. I roughly cut the cap, and march down to the courtyard. 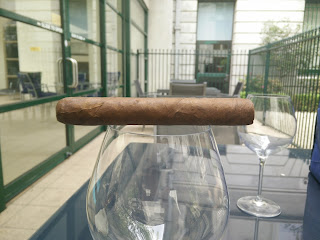 I met Kerri on a promotion course in country New South Wales, where I instantly recognised her from a series of Army recruitment posters that were designed to get women involved in the Army. The poster showed her in a cringe-inducing combination of full-makeup with golden blonde hair cascading down her shoulders, and a fierce looking battle rig replete with knives, grenades, and a roughly-slung light machine gun. She was one of four women on a course made up otherwise of 25 men, and was the best looking by a long shot. "By the end of this course", I thought, "I will eat that asshole". We were assigned shortly afterwards to the same section.

Mr. G, though nowhere to be found, has laid out two glasses on the table, and placed an assortment of English ales in an eski underneath. I take the first photographs, apply flame, and build up a hearty head of smoke by rapidly blowing and sucking, with the nub held wetly between my lips. Smoke billows as the coal glows, and I recoil in disgust at the tar. This cigar is awful. I clamp it between my teeth while helping myself to a beer, spilling most of it on the table as the smoke smarts my eyeballs. I briefly contemplate stubbing this thing out and retrieving the Partagas Piramedes that I'd spied, but decide instead to persevere. Luckily the beer is excellent, and does a wonderful job of suppressing the rubber fire in my mouth. I reach for another just as the first inch of the Cohiba fades into ash, and look up to find Mr. G walking grimly toward me. 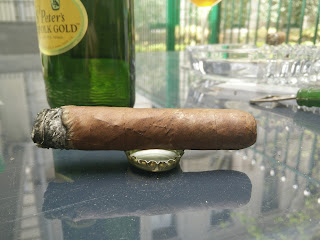 "You're so polite!" Keri beamed, flitting through the car door that I'd held open for her. "I love polite guys". I smiled back mute, while Boong, a meat-headed Boer and my main competitor, loudly called me a 'faggot' from the driver's seat. I shrugged and laughed, gutlessly reminding myself that I'd gained her approval by way of avoiding a confrontation. It was the final day of the course, and we were heading to the pub for some mischief. Kerri spent the night by my side while the other guys, Boong mostly, tried to drag her to the dance floor. She came back time and again, but I made my move too late, and caught sight of Boong dragging her out the door and into the night. I threw down shot after shot out of pure self disgust, and caught a cab by myself back to the barracks.

At the midpoint the Behike's rubber fire settles, and I detect wood smoke, methenamine, and strong tobacco. Mr. G sits silently opposite me, listening as I gurgle drunkenly about how disappointing his cigar is. It has only just struck him that I shunned his offer of one of the cheaper cigars, yet no rebuke has come. No protest. Just a coolly uttered "that was a gift from Carlos Ponce", before looking quietly at his phone. I remind my employer that it is very rude to use one's phone in company, and he faces the other way. I complain aloud about the harshness of this supposedly 'fine' cigar in between long, wet, frequent drags. I try filling my mouth with a long swig of Wychwood Hobgoblin pale ale so that the beer acts as a filter for the smoke, but both smoke and fluid go down my windpipe and I end up spraying the table with beer. I lazily wipe it up with my sleeve while the Behike fades slowly toward the midpoint. 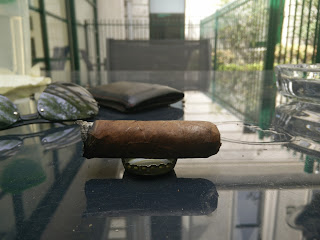 On return to the lines I ran headlong into Kerri, who was helping Boong throw up into a bin in the hallway. He roared "stay away from her", but I could only remember the promise I'd made to myself. I ran headlong at Kerri, hitting her in the waist with my neck and swinging her over my shoulder like I was Tarzan. She laughed while I fumbled for my room key, and got her inside and threw her roughly on the bed, and locked the room just in time for Boong to hit it head on. She smiled seductively while leaning backward on her hands. I had her but, like a dog that had finally caught the mail truck, I had no idea what to do. I needed to piss, shit, vomit, and sleep all at the same time, but I had an Army-standards Goddess on my bed and I needed to do something about it. I scooped her legs up and grabbed her waistline and, like a mother roughly changing a toddler, yanked her panties and leggings off in one movement. She gasped as I forced her legs apart, and let out a startled grunt as I ran my tongue from her asshole to the top of her 90s-throwback landing strip. She grabbed under my armpits and dragged me up to her, fishing my shriveled whisky dick out of my pants and insisted that I fuck her. This, with renewed banging on the door from Boong, was the last I remember before passing out. I woke up alone the next morning, pants still around my ankles, with the sheets and mattress soaked with my own cold piss.

Long-time readers of this blog will know that my favourite part of any cigar is the nub, from which I like to greedily suck until it explodes into a mess of white ash and wet wrapper. The Behike finally comes good, with notes of port wine and pepper over heavy tar. I reflect on how nice it was for Mr. G to make my birthday special by gifting me this cigar, and I make a mental note to repay his generosity one day. For now, however, it is still my birthday, and this asshole is giving me undeserved silent treatment, which makes me burn slowly with anger as the dying nub smoulders between my fingers. I stub the cigar quickly and deliberately into the ashtray, like a Grandmaster making a decisive chess move, and snap a quick picture with my phone. "Thanks for nothing", I utter, kicking empty bottles of ale around as I stumble away. 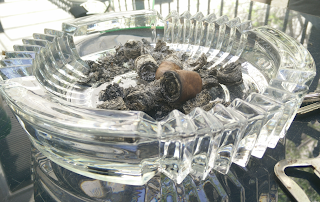