I'm in Darwin, having recently decided that a properly prepared survival bunker might be needed, and that the great expanse of nothing in Australia's top end is the place to do it. I've just finished a spicy pawpaw salad on a spicy sausage pizza, so my palate is well prepared to appreciate any nuanced flavours of the La Paz Corona. It's a beautifully veined, perfectly machine-made offering from Holland that cost me AUD$12.50, and my expectations are low. I last tangled with a machine-made when I reviewed a Phillies Titan, but that was American, and was quite likely fake (I was in Cambodia). I reason that the Dutch can do things much better than the Americans given that, at time of writing, they hadn't just allocated 44% of the electoral college vote to a crooked, snake-eyed, pro-choice Jewess reptile. 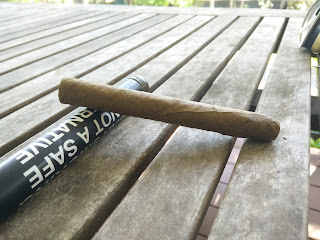 "Did I tell you to take a piss?" said the drill sergeant, pace stick pressed firmly into my chest. I was with a dozen other recruits in the middle of Canberra Airport, waiting for the bus to take us to the barracks for day one of basic training. He had told the group of us to collect our luggage and wait, at which I had desperately waddled off to the toilets to unleash the torrents of hot piss that I'd been holding since Melbourne. I wanted to tell him, and my gawking peers, that I thought I wouldn't get the chance to piss again for hours, and that I'd been drinking too much coffee and was nervous and that I wanted to go home. Instead, I just muttered a "no", at which he puffed himself up and eyed me for a long time. "What's your name, son?", he said, kindly. "Davide", came my response, at which he reared back slightly and boomed "WE'RE NOT FUCKING MATES. WHAT'S YOUR SURNAME?" I told him, and he breathed some stinking tobacco breath over me. "You, piss-boy, are not going to fit in here". My peers tittered and echoed his "piss boy" behind me. I wasn't yet technically in the Army.

The corona starts beautifully and smells terrific, with a perfect ready-cut draw and razor-sharp burn. It tastes bland, however, as if I were smoking it through a mouthful of half-cooked polenta. I'm pairing it with a lazy summer ale (basically a dry golden ale with more hops, by my boor's palate), and I find myself drinking with speed and aggression, making inflected 'mmh mmh' sounds with each deep draught. The corona tastes like the fourth cigarette I ever had: past the stage of hacking and rasping, but still trying to figure out if it's a taste I actually enjoy. The burn is super-fast, with the first-inch rapidly nearing completion as I type this paragraph. I balance it on the cut-down tinny of Great Northern lager I'm using as an ashtray, and maneuver my ageing camera into position. 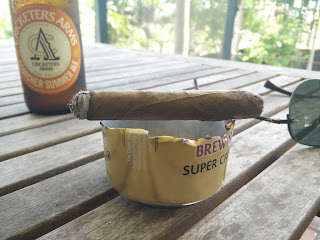 On arrival we were assigned bunks, and told to make our beds. I had never made a bed before, and fumbled around in a panic until a coursemate kindly made my bunk for me. I paid no attention to his method, figuring I'd have time to reverse-engineer it later. He was long finished when we were ordered to stand by our beds, and the platoon commander came through the dorm. "Did anybody help you make this bed, Recruit?", he enquired of me, to which I gave a shit-eating "no sir", while narrowing my eyes at my helpful coursemate. This was, I figured, a competition, and I'd take all the credit I could get. The Lieutenant had the entire platoon gather around my bunk, while he told them that the new standard in bunk-making had been set. At the conclusion of his accolades he grabbed the neat fold near the pillow and ripped the undersheet off, and ordered me to show my peers how it was done.

The heat in Darwin is horrific, with tropical humidity and searing desert sun and no wind unless accompanied by a violent tropical storm. It was a bad day to wear polyester bike pants under my thick cargo shorts, and the sweat drips down my leg hairs and into my dirty socks. The La Paz hasn't improved, but the occasional nutty trace gives a welcome break from the bland mid-tobacco. I have a splitting headache from the alcohol and the nicotine and the heat, and I can only hold a rapidly warming beer to my temple for quick relief before I drink it. My host joins me and I brief him on the cigar's bastard heritage and give him a drag. He inhales great lungfuls of the little La Paz, and remarks on his exhale that "after two martinis it doesn't taste too bad". I thank him for his insight, and he walks away with a "whatever". I wonder if I've overstayed my welcome over the past rent-free month, but I just put it down to the heat and yell for my own martini. 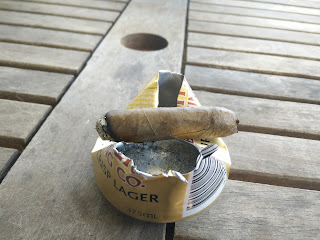 The only thing I recall of the succeeding few minutes was the feeling of my waning penis waggling, small and flaccid, in my PT shorts as I tried to replicate the once perfectly-made bed. I might remember some bastard-interpretation of hospital corners, and the shouts of "NOT LIKE THAT" as I tucked wrong sections of crisp sheet into wrong sections of steel frame. I do recall my cheeks burning red as I pranced gazelle-like around the bed trying to tuck in wan pieces of bedsheet while my platoon laughed at my drill sergeant's commentary. Eventually the bed looked made, and I looked at my feet while the platoon commander gave a speech about honesty and integrity. It was hour-one of my military career, and the start of a long and lonely three months of basic training.

The final third is amazing. The little La Paz has collapsed into a soggy mess and it tastes like the calcified edge of an overcooked toasted cheese. My headache has been replaced with a kind of wan delirium, and I sit nursing a giant, piss-fueled erection while getting turned on by the lithe white Goddesses in my Instagram feed. I follow each sip of martini with a pinched drag of my cigar, which burns red hot inside the peeling wrapper and sears my lips and fingers. I finally drop the smouldering nub into my makeshift ashtray and take the final photos with shaking hands. If you're cash-strapped, time-poor, brand-apathetic and need a quick nicotine hit, the La Paz Corona is your smoke. I'll keep them in mind when I'm stocking my bunker. 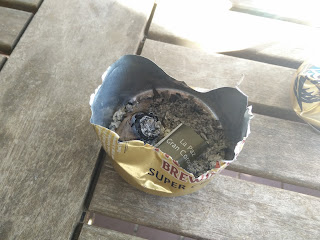