It is not a happy place, between the dusk and the dawn
Deep below the well lit and open spaces
I wait under the under
For them to come and rip me asunder
Tearing my core until morning.

This is a poem by Zachary Norman, who was the writer for a 1990s computer game called Interstate '76, in which you played the role of a vehicle-based vigilante. I remember playing it as a teenager and finding the fun of the game was constantly countered by the misery of the character's back story, along with the desolate Midwest hellscape in which it was set. Poetry was the medium by which your in-game mentor, Taurus, would express his dark past, and it is amidst these works that I'm finding a gloomy outlet. Today, some might say, I am even feeling a sense of happiness in my connection with these characters from my own past, however fictional. It is during this gentle poetic erudition that my phone blares out the opening bars of Limp Bizkit's Break Stuff, heralding a phone call. "Davidè" comes the oily tone of Mr G. "If you haven't killed yourself yet, come to my compound. I have a cigar that may interest you." And so, curiosity piqued, I terminate my scholarship, and catch a train into the city. 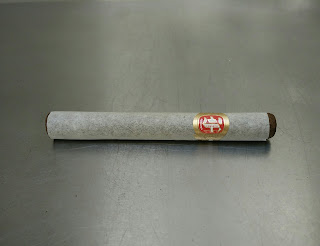 The cigar is a Fonseca KDT Cadetes, and an interesting beast to behold. The wrapper is the lightest possible wrapper I have ever seen in my life. It is white, as if a double claro had been left to bleach in the sun for months. I ask Mr G if this is some novelty cigar, to which he simply sneers. I shrug, ever trusting, and take the Cadetes to the flame. The foot instantly combusts, shooting licks of flame into the air while filling my nostrils with sooty smoke. I hack and cough under Mr G's quizzical eye, until the Fonsesca finally subdues. After the influx of carbon particles, the secondary flavours are almost refreshing, if a little bland: dry grass, tea, amidst mid tobacco. No tar is evident, but every fifth puff burns more of the papery quadruple claro wrapper leaves, which buffets soot into my lungs which needs to be suppressed with liberal swigs of beer. Purists often tell me that a simple glass of water is the best accompaniment to a cigar, but as is there isn't a day goes by where I don't imbibe, so why would I go dry while sucking ash? Questions such as these run on and on, dear reader. 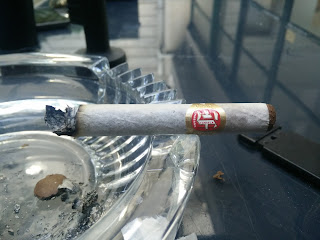 At the midpoint the Cadetes becomes extremely bitter, like dregs of overbrewed black tea in the base of a cup. The cigar really does leave you in a recondite solecism, whereby the coal goes out in an instant, but a relight makes the thing combust spectacularly, only to go out again in a cloud of its own ash. The draw is tight, the construction shabby, and even the band is kind of ugly. I am pairing it again with one of the cheapest beers one can get in Australia - the Oettinger pilsner, which comes in six-packs of 500ml cans for about sixteen of our Australian dollars. It is crisp, not too complex, but refreshing enough for such a day. And really, its main job is to douse the fuliginous cloud that palates my mantle with each puff. As usual, my desire for nicotine overcomes my distaste for the cigar, and my draw intensifies as I spur the Cadetes to the final inch. 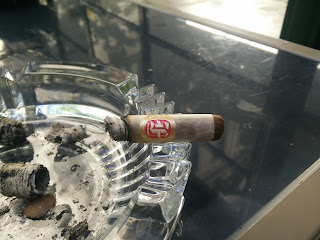 Long time readers of this blog know what's coming. It's a pitiful sight; one man, eyes rolling back in his head, sucking the dregs of a cheap cigar while his lips and fingers smart. I peel the band off and, to my disappointment, the entire wrapper leaf comes away, leaving behind deep Colorado filler. In desperation I reach for the multi-tool in my bag, with which I clasp the little Fonseca, and suck the remaining cigar until it is done.
And so, spurning the cigar, I bid my host adieu. And, dear reader, I bid the same farewell, to thee. 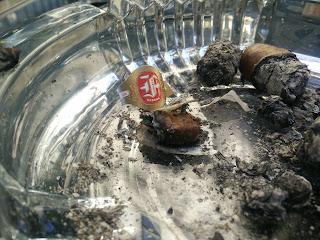