Today, unlike any other, your sturdy host finds himself in Frankston, which is a large regional city in Victoria's southeast. My friend Connor caught wind of my current depressive funk, and decided that a four-hour round trip to sink beers in his backyard might cheer me up. I noted at the time that I was fairly content to sink beer at home by myself but, weak against Connor's reproach, eventually capitulated. As I was getting ready a text message came through from Connor, stating only: "bring cigars". I deliberated briefly on why Connor thought he had the social capital to demand such an oblation but, cursing my cowardice, perused my humidor anyway. Amidst the mid-range garbage are some cigars that I purchased purely to have a stash to offer guests that never came: the Montecristo No. 5. And so it is that I switch verb tenses anew, and put the Monte 5 to the flame. 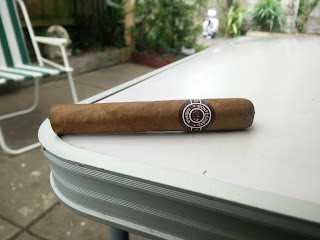 The Monte 5 starts well. There's no need to flower here. If you've had ten cigars in your life, there's a fair chance one of them has been one of these bad boys, and "it's started pretty well" is probably how you'd describe your first few puffs. Connor, being a long-time cigarette smoker, is dragging and heaving on his cigar, thirsty for the nicotine he so craves. I take the time to draw gently on my own cigar, and do note some subtle woodsmoke, maybe a little straw, amidst the mellowing mid tobacco. We are in Connor's backyard, seated on camp chairs and, though I want to remark on the flavour profile to him, the setting demands I focus more introspectively. Truth be told, despite the promises made in my season return post but a few weeks ago, the Fitful Fires brand is back to its old tricks. My depression, culminating from the months of solitude, poverty, breakups, breakdowns, and the cycle of intoxication and withdrawal, has had an almost petrifying effect. I can hardly mutter replies to Connor, let alone share my thoughts. Taking a leaf from his book I drag hard on my Monte 5, cleansing any lingering subtlety with an inundation of tarry smoke. I throw the Monte 5 on the table to snap some pictures, drain my Mexican lager, and feel a sob rattle through me. It starts at my feet, and I feel it coursing through my legs, my bowels, stopping briefly to seethe in my stomach, before I catch it in my throat with a physical lurch. Connor eyes me curiously, cigar in hand, while I lean forward, wind knocked out of me. I excuse myself for more beer. 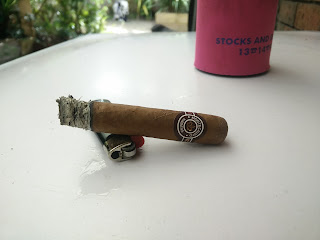 At the midpoint the Monte 5 is starting to really impress. I've been treating it poorly, yet the coal burns long and cool, the smoke mild and refined (if a little bland), and the construction in general is perfect. Connor's cigar has burned nearly to the band under his wanton guzzling, and he tells me I shouldn't waste my money on such fast-burning cigars. Hardly able to speak, I just nod and stare at my boots, before reaching anew for my beer. Could if I would, gentle readers, tell you a better story. Under the tutelage of Mr G, I have always tried to follow a general formula for my reviews. An intro, a photo, then an alternating story-review dichotomy until I conclude. I also try very hard to get these posts out weekly, but alas this week my inspiration has waned. I've got as little to talk about as I do to look forward to, and that thought alone nearly kills me. Maybe it will kill me. 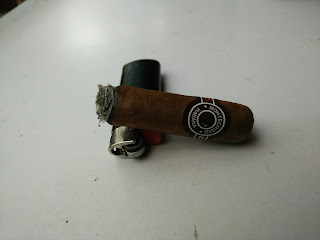 The final inch. The tarry nub full of sense-numbing nicotine, filtered through a moist and resinous cap. Connor has long since discarded his cigar, having smoked it barely past the band. He is telling me about the type of cigar he wants me to bring him next, but after the first "Churchill minimum, mate" I tune out. I am drunk, wretched in my own misery. What am I looking forward to today? A two-hour commute in the searing heat? My shithole apartment? A cask of wine and a disgusting hangover? I'm dragging frantically on my cigar, now pinched between my long nails growing from my thumb and forefinger, tasting nothing and feeling even less. My head swims and the churning in my guts threatens to rattle another sob through me, but I bury it in beer while dashing my cigar into the ashtray. I think this is the end.

Like I said at the start: you've probably had a Monte 5 before and when, inevitably, you have one again, I hope it at least brings you some joy. And I hope you have a wonderful life. 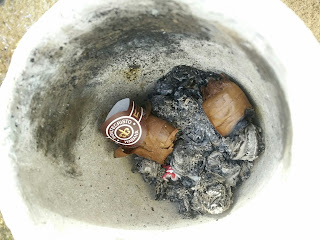